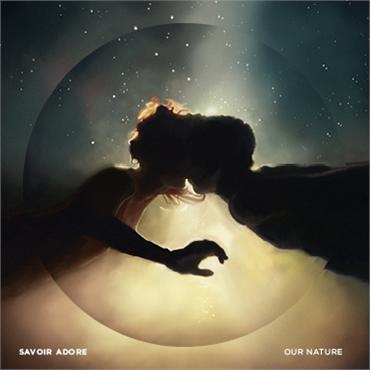 Click here to listen to “Regalia” on Noisey / Vice

On “Dreamers,” the dance-laden lullaby and lead single from Savoir Adore’s new album Our Nature, Paul Hammer and Deidre Muro invite listeners into a magical dream world.  Such worlds are nothing new to the fantasy pop duo, who inadvertently became a fixture of Brooklyn’s indie scene as the result of a dare. In 2007, as disheartened solo artists, they whimsically retreated out of the city to a rural studio with two rules: “48 hours.  No acoustic guitars.” They returned with The Adventures of Mr. Pumpernickel and The Girl with Animals in Her Throat (Cantora), a concept-driven EP set in a fairy tale land that narrates the tragedy of Gloria and her unrequited love. On 2009’s full length In The Wooded Forest (Cantora), they expounded on the EP’s mythical landscape.  But where Savoir Adore’s previous releases have surveyed these worlds at a distance, Our Nature zooms in, putting our inner landscapes and relationships at the core of every track.  In that vein, the recordings themselves are intentionally more crisp, aurally expansive and intriguing.

After recording the 2007 EP, Muro and Hammer hastily forged the grammatically faulty French moniker Savoir Adore for a MySpace page in order to share their experiments with friends. There was no turning back. The tracks caught on and made their way to Cantora Records, which released the EP as the duo began to work on a full length record. With the release of 2009’s In The Wooded Forest, the New York music press embraced Savoir Adore and set them on a path to expand their audience nationally and internationally. NME hailed Savoir Adore’s sound “musically and lyrically brave,” and Nylon praised it as “irresistibly melodic indie pop.” In 2009 and 2010, The L Magazine and The New York Post both named the band to their top bands to watch lists.  Adding band members Tim McCoy (drums), Gary Atturio (bass) and Alex Foote (guitar), who took part in Our Nature’s recording process, the band shared the stage with MGMT, Los Campesinos, Oh Land, and Toro Y Moi.

In the summer of 2010, the band toured the UK and France, including shows at Koko/Club NME and The Secret Garden Party. Their songs have been featured in various commercials (Almay, Citi, Yoplait), TV shows (Pretty Little Liars, Drop Dead Diva, Huge) and video games (Kinect Adventurer). During the 2012 Academy Awards, Tide premiered its new Tide Pods campaign featuring Savoir Adore’s cover of Men Without Hats’ “Pop Goes the World” (available on iTunes).

In late 2011, Savoir Adore offered a sneak peak of Our Nature, releasing “Dreamers” as a 7” on Neon Gold Records. With the release of the full album in 2012, Savoir Adore will hit the road to promote Our Nature and invite listeners, if only for night, into their magical realm.