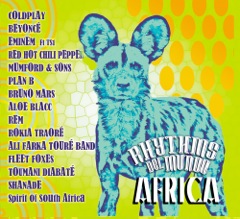 Formed in the wake of the Indian Ocean tsunami disaster in 2004, APE was the brainchild of founder Kenny Young and aims to raise awareness and funds for climate change and disaster relief projects.

To date the organization has mobilized some of the worlds biggest artists to help champion their cause and has provided funds to support over 300 projects worldwide, such as:

– Reforestation initiatives in the UK, Africa, Mexico and Brazil

– A Special Award for the global Transition Towns movement

– … and in times of need, to help alleviate those suffering from natural disasters.

Funds raised from this campaign will support organisations working throughout Africa to mitigate the impacts of climate change and drought.

Kenny Young, Founder and Trustee of Artists Project Earth said, “Artists Project Earth is funded entirely by sales of Rhythms Del Mundo albums. If you value our work addressing climate change and environmental justice, then please do make a donation to this good cause by purchasing a copy of our new album. Unlike most charitable donations, you get something tangible and enjoyable in return – as well as the knowledge that you are actively supporting some really well-respected organisations and projects. We are known as the ‘Fairy God-Funders’ of the climate change movement – please help us to continue spreading our magic!”