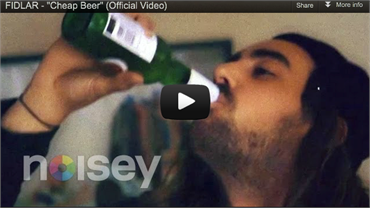 “Punk’s not dead! And Fidlar are here from Los Angeles to prove it with three-chord thrashes that summon the spirit of 77” – Guardian

“Rock needs a band like this from time to time. Someone to remind all those Coldplay’s of the world where music’s balls are.” – Nylon Guys

“FIDLAR channel elements of classic acts like the White Stripes and Pixies, while practically begging for a co-headlining tour with contemporaries like Bass Drum of Death and JEFF the Brotherhood” – SPIN

“The tune can be summed up in a handful of image descriptions; sandboarding, grim reaper, suicidal flip-up hat, skull mask, and shred.” – Filter Magazine

“They remind me of Pixies a lot (an obvious link, given the singer’s Frank Black style screeeeeeam), but there’s also some really, really nice’n’fuzzy guitars in there that sound like they’ve been nicked from the blueprint Death In Vegas followed on ‘Aiesha’.” – NME

“FIDLAR has an agressive, straightforward, but melodic conception of punk.” – LA Times

“But one wouldn’t mistake the band for one of its slacker subjects, not when they play this fast. The tracks sizzle with the aggression and bargain-price fidelity of the SoCal punk tradition, though FIDLAR’s catchy hooks have more in common with Social Distortion and Wavves than Black Flag. ” – MTV Buzz

“Thanks for coming, man. Want some bum juice?”
“What the fuck is in this shit?”
“Tampico and Everclear. It’s pretty gross.”

When they started in 2009, seeing FIDLAR meant showing up to a house party and eventually having this exchange with one of them. Zac Carper, The bands guitarist and singer (well, one of ’em) would hand you a red cup , throw an arm around your neck and probably end up blurting out how fucked up he was. Their set list would read more like a grocery list of party supplies than a list of songs: “Cocaine. Cheap Beer. Chinese weed. Four Loko.”

After a few years of being a band Zac still plugs in his pedals attached to a skate deck (“Pedal board”, get it?) and says “Hi We’re FIDLAR: F-I-D-L-A-R. It means ‘Fuck It Dog, Life’s a Risk”.  Seeing a FIDLAR set consists of drinking and dancing with people that are twice as drunk as you are while the band rips through songs about what they know best: The girl doesn’t call, my ex is a whore, I lost my phone, my car is a piece of shit, my friends are pieces of shit, I do too many drugs, I’m really awkward, I love Del Taco.

FIDLAR is Zac Carper, Elvis Kuehn,  Brandon Schwartzel, and Max Kuehn.   Elvis and Zac met at Kingsize Soundlabs in LA and recorded a ton of demos with the band before playing a live show.  Their first show was on a FMLY bike ride at a skatepark in Culver City. Three years later the band has played with Black Lips, OFF!, Japanther and toured with The Hives.  They’ve released two EP’s and just got back from touring Europe.

Listening to them, you can tell that the band did their homework on punk rock and seem dead set on inflicting lessons on anyone willing to listen.  Any given song will give you a Germs influenced guitar solo, the catchy “Ooo’s” and “Ah’s” of The Misfits , and lyrics in the same family as Black Flag’s “Six Pack” and “TV Party” . On the same token they can just as easily be compared to any of the bands they cover (Blink 182, FEAR, CCR, Warron Zevon), yet it all comes across entirely their own: Surfier, Faster, more fuzzed out, more personal and a lot more drunk.

FIDLAR’s first LP is coming out via Mom + Pop and Wichita recordings. Recorded at their home studio, The album is set to be 14 tracks long and out January 22nd.  FIDLAR are your dumbass friends that find a beer, scrape the shit off their shoes, and tell you how the hardest thing about waking up late and trying not to fuck up your life is having to do it with no job, no money and everyone bumming your cigarettes. 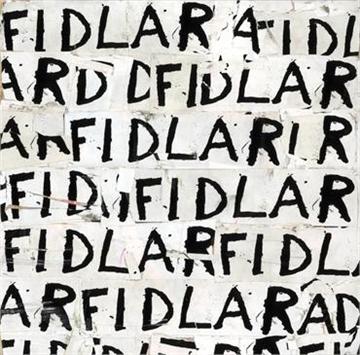