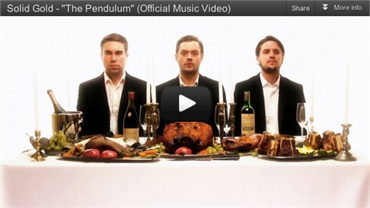 Click Here To Watch “The Pendulum” Video On Refinery29

The new video for “The Pendulum” may be directed by Dan Huiting, the guy behind the preternaturally beautiful videos for Bon Iver’s “Calgary” and “Beth/Rest,” but rather than bucolic meadows, here we get a banquet dinner gone weird. As the members chow down on a Downton Abbey-worthy spread, things soon get messy, drunk, and dangerous.

Solid Gold frontman Zach Coulter and bassist Adam Hurlburt wrote the first ever Gayngs’ song, “The Gaudy Side of Town”, with Ryan Olson back in 2009. The three met in Minneapolis after Solid Gold’s debut album, Bodies of Water, gained critical acclaim abroad, and in the Midwest.

Zach, as well as bassist Adam Hurlburt, proceeded to record and tour with Gayngs’ for several years before focusing their efforts on Solid Gold. Over two years later, their second full length album, Eat Your Young,  is being released on Olson’s Minneapolis-based label, Totally Gross National Product, home of Marijuana Deathsquads and original label of Gayngs’ affiliate, Poliça. 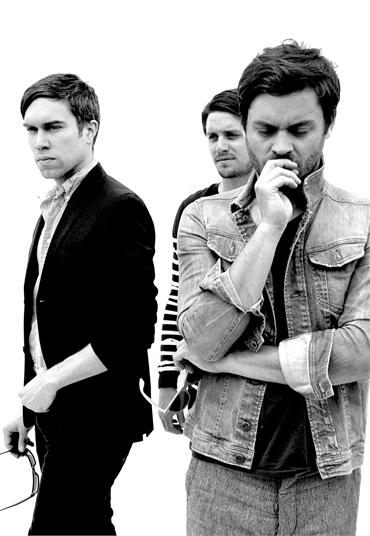 So the Portuguese have this saying: saudade, a single word that summarizes an entire state of being, a lingering sense of longing for lost love and sepia-toned snapshots of yesterday. The way Solid Gold sees it, saudade might as well be the subtitle of their second album: Eat Your Young, a slow-burning set of skittish synths, glassy beats, ripple effect riffs, and melancholic melodies that leave you wondering what left a trail of scar tissue deep within the group’s core trio (frontman Zack Coulter and multi-instrumentalists Matthew Locher and Adam Hurlburt).

Only it’s not that simple, not as easy as reducing a record to a series of bad relationships and broken hearts. Depending on who you ask, Eat Your Young is inspired by everything from lucid dreams to existential dread to the way we often wander through life in a catatonic state. And yet, it’s not a hopeless listen; more like an album that maintains its mood for 40 minutes and leaves an impression as deeply ingrained in your subconscious as the nostalgia-triggering memories that earned saudade its own national holiday in Brazil.

“We’ve never been motivated by making records,” explains Locher. “We’re driven by making something beautiful—capturing a moment in our lives that can translate to any place or time.”

That much is clear as Eat Your Young creeps across your speakers like a quiet storm, ebbing and flowing at every turn, from the exorcised demons of “The Pendulum” to the bookending outbursts of “Shock Notice” and “In the Hollows.” All of which sounds incredibly confident despite the record’s shades of darkness. That’s because Solid Gold spent years developing their musical and lyrical concepts, beginning with their smoky club formation at the University of Wisconsin—Locher and Coulter were in the same architecture class—and becoming much more of a serious pursuit once the group moved to Minneapolis and tracked their 2008 debut, Bodies of Water.

“There’s a competitiveness underlying the desire to make the best music possible,” says Coulter. “It’s a combination of a meticulous approach and an off the cuff, punk-like writing style.”

“Our instrumentation ranges from crude to classic,” adds Locher. “All of us operate within those parameters. The best way to describe our songwriting process is ‘atomic’—electrons trying to rip themselves from a nucleus to recombine into new forms.”

Maybe that’s why Eat Your Young brings to mind everything from the gleaming skyscrapers of Blade Runner to the dimly lit streets of a midnight drive. Or as Locher puts it, alluding to the band’s push and pull dynamics, “Dystopian futures, wrought with oppression and rich with struggle, just seem to fit our sound best.”

“A slinky, sexy, sophisticated mix of indie, electro and soul; like if the Purple One fronted Death Cab For Cutie.” – MTV Buzzworthy

“We swear to god, if we had any wedge, we’d sign them ourselves.” – The Guardian UK

“A stirring trip that seems like a perfect soundtrack to a debauchery filled night out in the city.” – Culture Bully

“Perplexing and drifting psych-dream-gazing-beats, that simply collapses around your soul” – Disorder Magazine 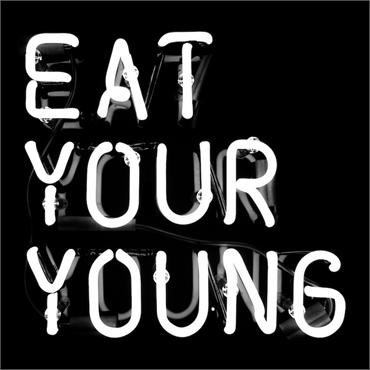 The perfect balance of cold wave, new wave and pop: it’s spacious, it’s lonely, and above all else, it’s infectious.” – SPIN

“A mysterious sort of sound with smooth yet penetrating lead vocals.  It was a really nice set and start to the showcase”- Charged.FM

“Each song was a tribute to solid songwriting featuring some fairly original arrangements.” – WUOG