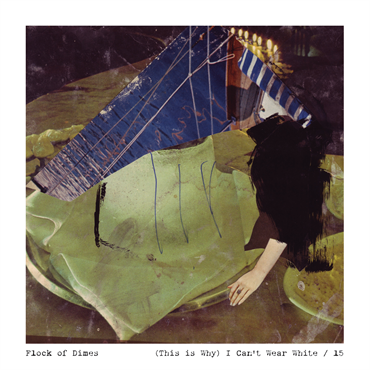 On November 20, Frenchkiss Records will release “(This is Why) I Can’t Wear White” b/w “15,” the third in a series of 7-inch singles from Flock of Dimes, the solo project of Wye Oak’s Jenn Wasner. Limited to 1,000 copies, each 7-inch includes a download coupon for both tracks. The album will be released digitally as well.

Jenn launched Flock of Dimes in 2011 as a way to explore more experimental recording and songwriting outside of the burgeoning success of Wye Oak. A tour opening for Sharon Van Etten followed, and a debut 7-inch, “Prison Bride” b/w “I Can’t Tell You Why (screwed mix),” was released by Baltimore-based Friends Records in April of 2011.  A 2nd 7-inch was released this past September through Merge Records.  This 3rd release was produced by Mickey Free once again and features beautiful cover art by Beth Hoeckel.