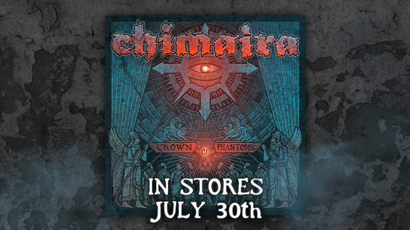 CHIMAIRA will release “Crown Of Phantoms” on July 30th, 2013. The band’s seventh studio LP has already started collecting its fair share of accolades.

“Tracks like ‘No Mercy,’ ‘Plastic Wonderland’ and ‘Spineless’ are absolute slayers that will surely impress longtime fans and newbies alike, and bring that classic ‘I Hate Everyone flavor’ we’ve all grown to love.” – Revolver Magazine

The band recently made headlines by way of crowd-funding a fan version CD/DVD where they doubled their initial goal via IndieGoGo.

CHIMAIRA just finished wrapping up a successful run on the “Dont Pray For Us Tour” with ASKING ALEXANDRIA and plans to be back on the road soon.


PURCHASE “ALL THAT’S LEFT IS BLOOD” ON ITUNES HERE”

For more than a decade, CHIMAIRA has been imposing its gravity on the metal community by continually touring the globe and selling more than a million albums worldwide. Their brand of heavy music has evolved and transcended both itself and the trends while maintaining its persistent, bludgeoning force. In 2013, CHIMAIRA continues to direct the masses and define a dark future with their new album, “Crown of Phantoms.” Hunter comments on the band’s forward progression:

“When I started this band I had a desire to make extremely heavy, eclectic metal. Nothing has changed in that regard. I wanted to merge all the styles I loved into a hybrid of sounds. Having the chance to reinvent the group gave me the opportunity to work with unbelievable players and take the essence of Chimaira to uncharted territory. Assembling the right team was essential to creating what I feel is some of the craziest and most passionate music I’ve had the pleasure to be a part of. The past defines us while the present refines us.”