New York, NY – March 24, 2015 – The 4th annual 90’s alternative music tour is proud to announce Everclear, Toadies, Fuel & American Hi-Fi to perform at each date of this year’s “Summerland Tour.” Summerland Tour, previously heralded by Rolling Stone as one of the “10 Hottest Summer Package Tours”, will take the nation by storm kicking off on June 11th in Ft. Myers, Florida. For more information, please visit: http://summerlandtour.net/.

With tremendous excitement towards this year’s Summerland Tour, Alexakis explains, “This is the kind of line up I’ve dreamed of when I started the Summerland Tour.  With Toadies, Fuel, American Hi-Fi, and of course Everclear, this is guitar rock at its finest. I can’t wait to see how people react each night.  Game on!”

For over two decades, Everclear’s sound has reflected the rock, post-punk, and singer/songwriter influences of Art Alexakis, including acts like X, the Replacements, the Pixies, Bruce Springsteen, Tom Petty, and Elvis Costello. The band found success with their first three albums on Capitol Records, Sparkle and Fade, So Much for the Afterglow, and Songs from an American Movie Vol. One: Learning How to Smile, which were all certified platinum.

On April 28th, Everclear will release their ninth studio album titled Black Is The New Black via The End Records/ADA. Across the album, the insistent kick of drummer Sean Winchester, athletic groove of bassist Freddy Herrera, and ridiculously skilled guitar shred of Davey French join forces behind the storm of giant guitar riffs swinging mightily from song to song. A bit of tasteful keyboards from Josh Crawley add atmospheric punch to songs that could crush a tiny dive bar or destroy the cheap seats in the world’s biggest arena with equal force. Fans will be able to purchase the Black Is The New Black Vinyl starting June 16, 2015.

After bursting onto the national scene with their breakthrough Rubberneck album, which begat their signature single “Possum Kingdom,” the successful follow-up single “Away” and the immense fan favorite “Tyler,” Toadies have recently revisited their platinum-selling 1994 debut with a 20th anniversary reissue of the album.

The Toadies remain raw. Vaden Todd Lewis still sings as though he’s on the precipice of insanity, clinging tenaciously but perhaps already plummeting. Lewis’s and Clark Vogeler‘s guitars rip and tear like thick fingernails at supple flesh. Mark Reznicek and bass player Doni Blair (who joined the band in 2008) fuel the fury with relentless, seething rhythm.

Fuel formed in 1993 while playing the club circuit in and around Harrisburg, Pennsylvania. The band signed to Sony Records and in 1998 released their critically lauded, debut album Sunburn with the massive hit single “Shimmer”. Their second album Something Like Human took the band to a new level of stardom, hitting multi-platinum status driven by the singles “Innocent” and “Hemorrhage”, which remained at #1 for ten weeks. In 2003 Fuel released their third record Natural Selection, and found success at radio again with the hit song “Falls On Me”.

Made up of Brett Scallions (Vocals), Andy Andersson (Guitar), Brad Stewart (Bass) and Shannon Boone (Drums), Fuel released their most recent album Puppet Strings on MRI/Red. Catapulted by the first single, the driving, hypnotic “Soul To Preach To”, the album entered the Billboard rock charts at #1. 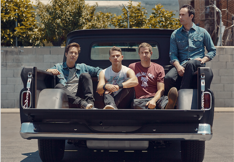 Blood & Lemonade is American Hi-Fi’s fourth full length and their first since 2010’s Fight the Frequency. Featuring the “Golden State” and other notables “Allison” and “Armageddon Days,” the record wholly embraces the sound and spirit of classic, balls-to-the-wall, guitar rock mixed with the power pop sensibilities that lead to their worldwide smash “Flavor of The Weak.” Blood & Lemonade was released worldwide on September 16th, 2014 via Rude Records.