THE READY SET
Premiere New Single For “Swim”
Watch Now on Being Blogged: bit.ly/1RqQL7M
New Album
I Will Be Nothing Without Your Love
Out April 8th via Hopeless Records
Album Available For Pre-Order: http://bit.ly/1P2xxzq
March 30th, 2016 – Los Angeles, CA – Electro-pop act, The Ready Set, has partnered with Being Blogged to premiere their new single, “Swim“. Stream the track here: http://bit.ly/1RqQL7M. “Swim” is the newest single from The Ready Set’s upcoming album, I Will Be Nothing Without Your Love, out April 8, 2016 via Hopeless Records. For more information, please visit: http://www.thereadyset.com/
Watch The Ready Set’s recent video for “Disappearing Act” on Kick Kick Snare, here: http://bit.ly/1REeZao, and check out the first single, “Good Enough“, here: http://bit.ly/223Xds3. The new album is now available to pre-order on iTunes, which includes a free instant download of “Good Enough”: http://apple.co/1Ra2MA9. An exclusive version of the album with three extra tracksis available to pre-order through Target: http://bit.ly/1UjiBDC . Fans can also pre-order various merch bundles from the webstore, here: http://bit.ly/1P2xxzq.
“‘Swim’ is about standing on the line of confidence and fear of losing control entirely, but the willingness to accept any outcome,” says Jordan Witzigreuter of The Ready Set, explaining the meaning behind the new single. “I used a lot of semi-tropical bells and xylophone sounds in this one, but it’s a bit less minimal than some of the other songs on the record. Overall it’s less vocal driven than a lot of my other stuff, which is a style I’ve wanted to get into for a while now.”
I Will Be Nothing Without Your Love Track Listing 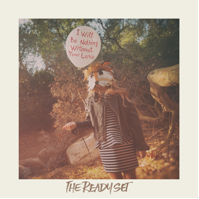 1. Disappearing Act
2. Being Afraid
3. Good Enough
4. Concrete
5. I Will Be Nothing Without Your Love
6. Run With Me
7. Should We Go Downtown
8. Swim
9. No Love (feat. Ansley Newman)
10. First
11. Fire In The Sky
12. See You
Jordan Witzigreuter was only 20 years old when nearly overnight, the young Indiana-born musician-who had spent the better part of his teens writing an arsenal of illegally catchy, electro-pop songs-was plucked from near obscurity and thrust into the spotlight. Six years have passed since the release of The Ready Set’s debut album, I’m Alive, I’m Dreaming, which hit No. 3 on Billboard’s Heatseekers chart, thanks to the platinum-selling success of the LP’s first single, “Love Like Woe. 2011 saw the release of The Ready Set’s sophomore album Feel Good Now and the hit song “Young Forever.” The band’s most recent album, 2014’s The Bad & The Better, charted at #75 on the Billboard 200. The Ready Set has toured with The Wanted, Carly Rae Jepsen, Cher Lloyd, Breathe Carolina, We The Kings, and more.
Tour Dates:
Apr 1 The Roxy Theater Los Angeles, CA (w/ Set It Off and Pop! Fiction)
For more information:
http://www.hopelessrecords.com
https://www.facebook.com/thereadyset
https://twitter.com/thereadyset
https://www.instagram.com/thereadyset