To Write Love on Her Arms
To Host Google Hangout in Celebration of
10th Anniversary
Releases “10 Years of TWLOHA” video
Watch it now, here:
https://youtu.be/vB5MnYtD-K8
Tickets for “TWLOHA Turns 10”
Anniversary Event Available, here:
http://livemu.sc/1o7edeK
Melbourne, FL – March 30, 2016 – To Write Love on Her Arms (TWLOHA) has announced that they will be hosting a Google Hangout tonight, March 30th, in celebration of the organization’s 10th anniversary. The conversation, which will include TWLOHA founder Jamie Tworkowski, Switchfoot’s Jon Foreman, and Renee Yohe of Bearcat, will begin at 7pm EST and can be joined, here: https://youtu.be/8TuNfRPus7M. For more information, please visit: twloha.com.
In addition to the Google Hangout, TWLOHA has released a special “10 Years of TWLOHA” video. The film features an in-depth look at TWLOHA’s brightest moments and memories from the past decade. Watch it now, here: https://youtu.be/vB5MnYtD-K8. 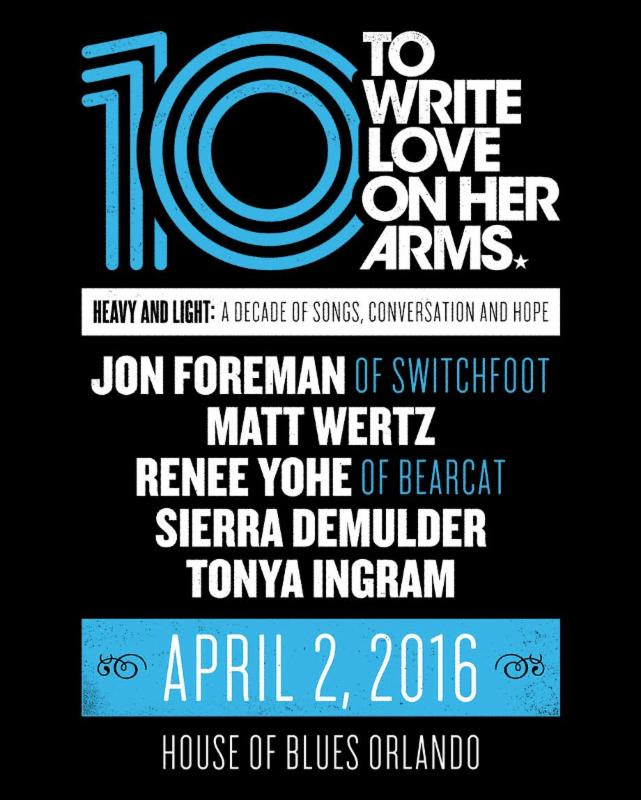 This Saturday, April 2nd, TWLOHA comes to House of Blues Orlando for TWLOHA Turns 10. The event is an extra-special version of the organization’s HEAVY AND LIGHT format, “an evening of songs, conversation, and hope.” The evening will feature performances by Jon Foreman of Switchfoot, singer/songwriter Matt Wertz, spoken-word poets Sierra Demulder and Tonya Ingram, and Bearcat’s Renee Yohe, about whom the original TWLOHA story was written in 2006. Everyone in the room will leave with a list of resources, people and places they can turn to for help. To purchase tickets, please visit: http://livemu.sc/1o7edeK, and for more information on TWLOHA, please visit: twloha.com.
To Write Love on Her Arms is a nonprofit dedicated to presenting hope and finding help for people struggling with depression, addiction, self-injury, and suicide. TWLOHA exists to encourage, inform, inspire, and also to invest directly into treatment and recovery. Since its start in 2006, TWLOHA has donated over $1.5 million directly into treatment and recovery and answered over 180,000 messages from over 100 countries.
Over the past ten years, TWLOHA has been heralded by press and seen on NBC Nightly News, CBS Sunday Morning, MSNBC, Rolling Stone, Paste Magazine, Relix, US Magazine, Glamour, Yahoo!, The Huffington Post, The Chronicle of Philanthropy, NYLON Guys, MTV, Elle, NPR, and so many more. The organization has seen support from numerous celebrities including actress Jessica Chastain, actor Jared Padalecki, Miley Cyrus, Liv Tyler, Joaquin Phoenix, actress Sophia Bush, singer/songwriter Mat Kearney, USA soccer stars Alex Morgan, Ashlyn Harris and Ali Krieger, singer/songwriter Christina Perri, actor Zack Efron, actor James Earl Jones, Whitney Port, Hayley Williams (Paramore), among others.
This past September TWLOHA wrapped its 4th annual campaign to honor National Suicide Prevention Week and World Suicide Prevention Day. The organization was overwhelmed by the amount of love and support shown during this year’s campaign, titled “We’ll See You Tomorrow,” during which nearly $83K was raised for treatment and counseling. TWLOHA also participated in events in Toronto, Chicago, and Nashville before wrapping up the week in Minneapolis with two final events: one with the Minnesota National Guard and the second featuring a special pop-up shop at the Mall of America.