Set Your Goals
Announce Mutiny! 10th Anniversary
Shows and Vinyl Reissue
California City, CA – August 5, 2016 – Melodic hardcore six piece Set Your Goals has announced that they will be celebrating the 10th anniversary of their critically acclaimed debut album Mutiny! with a series of special anniversary shows this December. The east coast shows, taking place in Boston, Philadelphia, and New York City, will feature Misser as direct support, as well as Like Pacific, Can’t Swim, and Search Party (Zac Eisenstein from Man Overboard). Tickets go on sale next Tuesday, August 9th at 11am EST, and can be purchased, here: setyourgoalsband.com.
Vocalist Jordan Brown shares: “Hey guys! As you know, SYG is back in action. We took three years off to collect ourselves. Weren’t sure if we’d ever get back together, but we did it. It just felt right. It was a big part of our lives.
We are excited to be booking these Mutiny! shows, where we will play the album in full, plus another list of songs from our other releases.“
In addition to the upcoming shows, the band will be honoring Mutiny! with a fresh 10th anniversary reissue in 4 limited variants and special, newly-envisioned cover art. The vinyl reissue will be released September 30th via SmartPunk, and can be pre-ordered starting next Tuesday, August 9th.
Mutiny! was originally released on July 11, 2006. It was the band’s first full-length album, and it ignited a shift in momentum for not only Set Your Goals, but also the genre the band prescribed itself to. The album’s eleven songs nodded respectfully to the band’s predecessors while championing a fresh, unique perspective. It captivated listeners and critics alike, and ushered in a new wave of pop punk where Set Your Goals’ influence can still be regularly heard.
Set Your Goals’ Mutiny!-era line-up – Jordan Brown (vocals), Matt Wilson (vocals), Joe Saucedo (bass), Audelio Flores (guitar), Daniel Coddaire (guitar), and Mike Ambrose (drums) – plan to pick up on the momentum they created in 2006 via these special Mutiny! anniversary shows, reinvigorating the electricity it spawned. During a time where many attempt to recapture the spark that was once there, the air around Set Your Goals is still certainly charged and tingling.
For more information, please visit:
Website: setyourgoalsband.com
Facebook: www.facebook.com/setyourgoals
Twitter: www.twitter.com/SetYourGoals
Instagram: www.instagram.com/setyourgoalsband 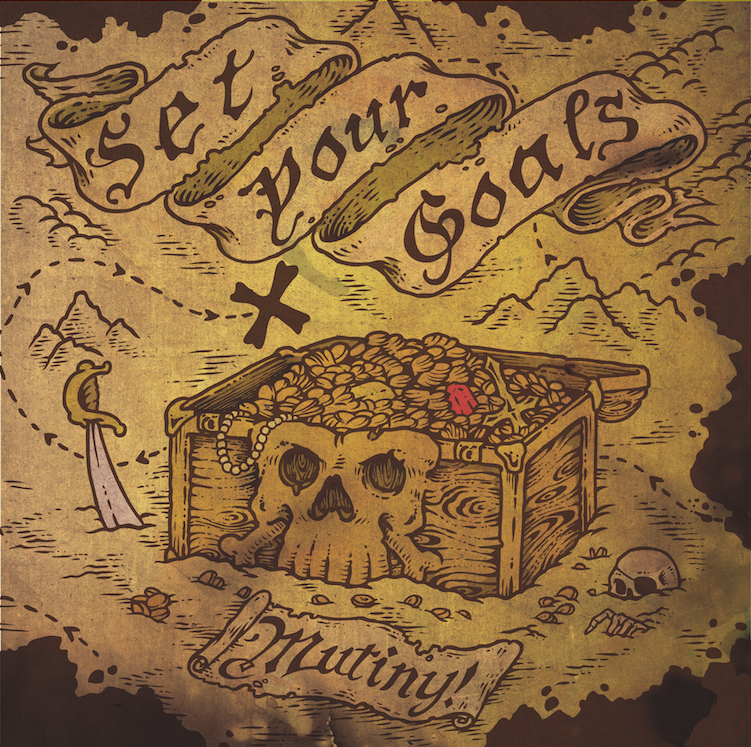