SUM 41
Announces
DON’T CALL IT A SUM-BACK TOUR
with SENSES FAIL and AS IT IS
VIP Packages Presale Tuesday, August 9th
@ 10:00 AM Local Here
Tickets On Sale Friday, August 12th
@ 10:00 AM Local Here
August 8th, 2016 – Los Angeles, CA – Pop punk veterans SUM 41 have announced a Fall 2016 North American tour in support of their forthcoming new album, 13 Voices, due out October 7th via Hopeless Records. With support from Senses Fail and As It Is, Sum 41 will kick off the tour on October 5th in Orlando, FL and make over 20 stops in cities across the United States and Canada before wrapping on November 6th in Los Angeles, CA. See below for a full list of dates.
Sum 41 has teamed up with CID Entertainment to offer 3 levels of VIP Experiences throughout the Don’t Call It A Sum-Back Tour. VIP amenities include everything from an invitation to a pre-show jam and hang with Sum 41 to a viewing area on stage during the show. VIP pre sale begins Tuesday, August 9 at 10am local time. Public on sale begins Friday, August 12 at 10am local time. Additionally, Sum 41 have also partnered with the Sweet Relief Musicians Fund to help raise money and awareness on the upcoming tour. For 25 years, Sweet Relief Musicians Fund have been providing financial assistance in the form of grants, medical bill reductions, and outside assistance to all types of career musicians and music industry workers who are struggling to make ends meet while facing illness, disability, or age-related problems. Donations can be made during ticket checkout.
Back in June, Sum 41 released the first song off 13 Voices, called “Fake My Own Death”. Currently at 3+ million views, the video for the song quickly went viral and garnered praise from Billboard, MTV, Alternative Press, Huffington Post, Mashable, Entertainment Weekly, Loudwire, Bustle and more. The ten-track album marks the band’s first LP in five years, following up 2011’s Screaming Bloody Murder, which featured the Grammy Nominated song “Blood In My Eyes.”
With the highly anticipated upcoming release of this album, Sum 41 are thrilled to be heading back out on the road and have been playing “Fake My Own Death” on Warped Tour all summer long. Click here to watch a collection of videos to recap the experience.
Whibley began writing for 13 Voices immediately following his four-month stint in the hospital. The frontman recalls, “I had to learn how to do everything again-my motor skills, learning how to play guitar again… I couldn’t even walk at the time. It was really difficult, but at the same time if I didn’t have a record to make, I don’t think I would have recovered as quickly, or even at all. Writing music gave me a purpose. I had to get better.” As Whibley’s health improved, so did his ability to write songs, and 13 Voices soon began to take shape being recorded, produced and engineered by Deryck Whibley at his home in Los Angeles.
SUM 41 consists of five members including Deryck Whibley, lead guitarist/backing vocalist Dave “Brownsound” Baksh, co-lead guitarist/backing vocalist Tom Thacker, bassist/backing vocalist Cone McCaslin and drummer Frank Zummo.
VIP Packages (Presale: Tuesday, August 9th @ 10:00 AM Local)
The ‘Introduction To Destruction’ VIP Experience
$139 each 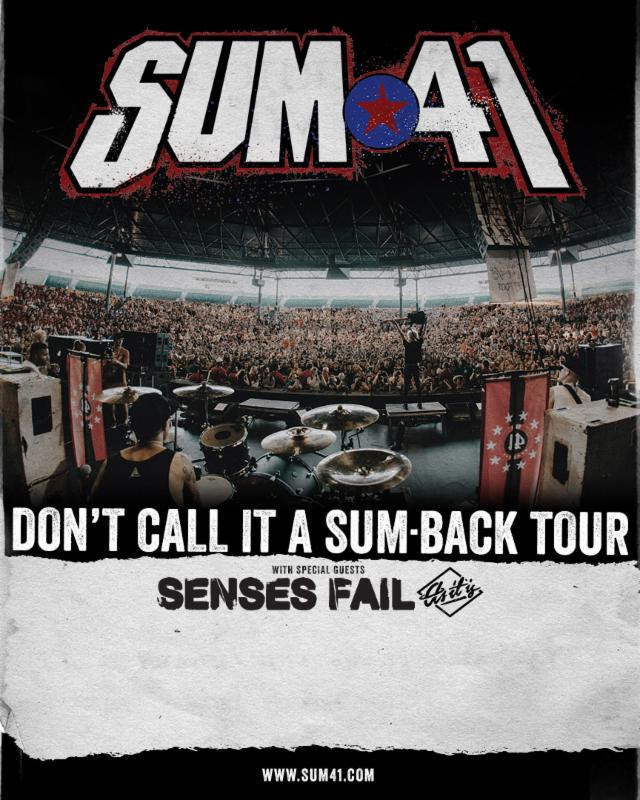