With Standing Ovation Performance on

The Late Show with Stephen Colbert

“Sum 41 further prove they’re better than ever with
electrifying ‘Late Show’ performance”
– Alternative Press
Pre-Order New Album 13 Voices Here:
http://smarturl.it/Sum41Preorder
Listen to New Single “War” Here:
http://smarturl.it/SpotifyWar
October 4, 2016 – Los Angeles, CA – Last night, pop punk veterans Sum 41 made their return to Late Night TV with a performance on The Late Show with Stephen Colbert. The band played one of the newest fan-favorites, “Fake My Own Death,” from their upcoming album release, 13 Voices out this Friday, October 7th on Hopeless Records. Check out the performance here.
On performing on Colbert, Deryck Whibley stated, “This is a huge life goal of mine. The idea of performing on Colbert played a huge part of my recovery process in motivating me to stay on track and get better. My motor skills were completely messed up. I used to say to myself that I need to get better and release a good record, and I HAVE to play Colbert, and now it’s happening and I couldn’t be happier. I’m such a huge fan of his.” Sum 41 has previously performed on Saturday Night Live (twice), CONAN, The Late Show with David Letterman, The Tonight Show with Jay Leno, The Late Late show with Craig Kilborn as well as Jimmy Kimmel Live! multiple times.
Last week, Sum 41 released one last track for fans, along with a music video for “God Save Us All (Death To POP)”. The music video, directed by Blake Higgins, shows highlights of the undeniable force that is Sum 41 on stage this summer during Vans Warped Tour, their European tour dates and all things in between.
The band recently released a single and music video for their singe, “War,” which is playing at CIMX, Faction, Alt Nation, KROQ, KFMA, KFRR, KITS, and more! Additionally, the new video also has over 2.1 million views. Whibley states, “I feel that this song literally saved my life. I was at my absolute lowest point of what seemed like a never-ending recovery. When I was at a tipping point of falling back into drinking or staying the course of recovery, I grabbed a pencil and paper instead of a bottle and started writing. Whenever I had any thoughts of giving up, I would read these lyrics to myself over and over again. They helped remind me of what it was that I was fighting for, and that I needed to keep fighting harder. Giving up was not an option.”
The first track released from 13 Voices received critical praise for the bands triumphant return in over 5 years. The standout song “Fake My Own Death” currently has over 4.4 million views on the video. The ten-track album follows 2011’s Screaming Bloody Murder, which featured the Grammy Nominated song “Blood In My Eyes.”
Whibley began writing for 13 Voices immediately following his four-month stint in the hospital. The frontman recalls, “I had to learn how to do everything again-my motor skills, learning how to play guitar again… I couldn’t even walk at the time. It was really difficult, but at the same time if I didn’t have a record to make, I don’t think I would have recovered as quickly, or even at all. Writing music gave me a purpose.” As Whibley’s health improved, so did his ability to write songs, and 13 Voices soon began to take shape being recorded, produced and engineered by Deryck Whibley at his home in Los Angeles.
The Sum 41 fans have been coming out in overwhelming numbers to the recent live shows, with the band playing to some of the biggest crowds of their career. Most recently wrapping up their summer run on the Vans Warped Tour and touring overseas, they are looking forward to kicking off their headline tour starting tomorrow, October 5th in Orlando, Florida. VIP Packages are available here. The band will be stopping at some record stores along the way for in-store acoustic performances and signings. Fans can purchase the album at Daddy Kool Records (St. Petersburg, FL), Newbury Comics (Boston, MA), FYE Mills (Philadelphia, PA), or Vintage Vinyl (Fords, NJ) for entry and a free poster. Limited Space Available. 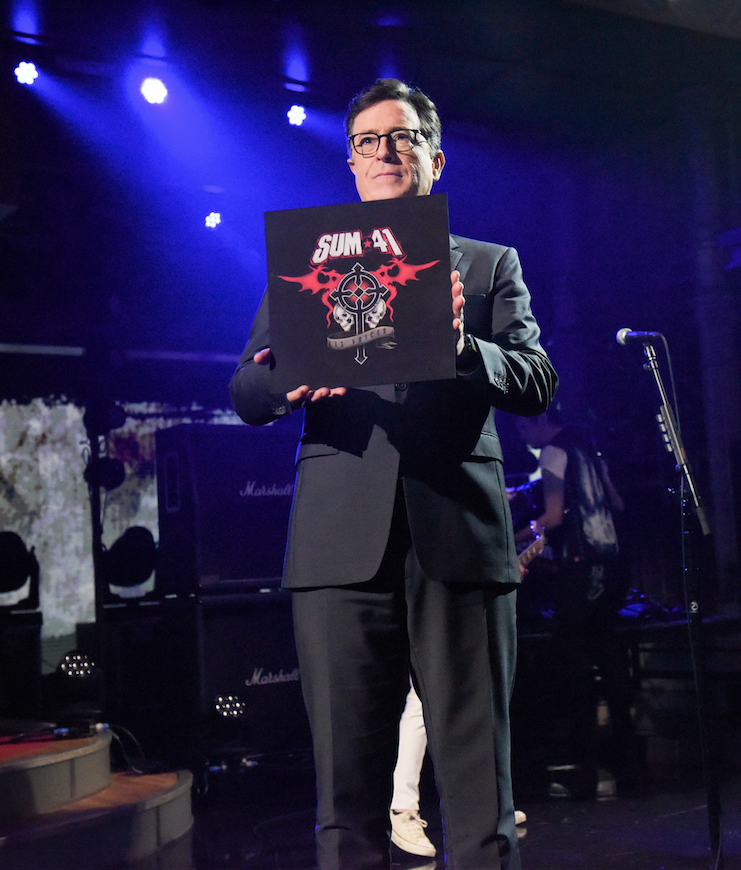